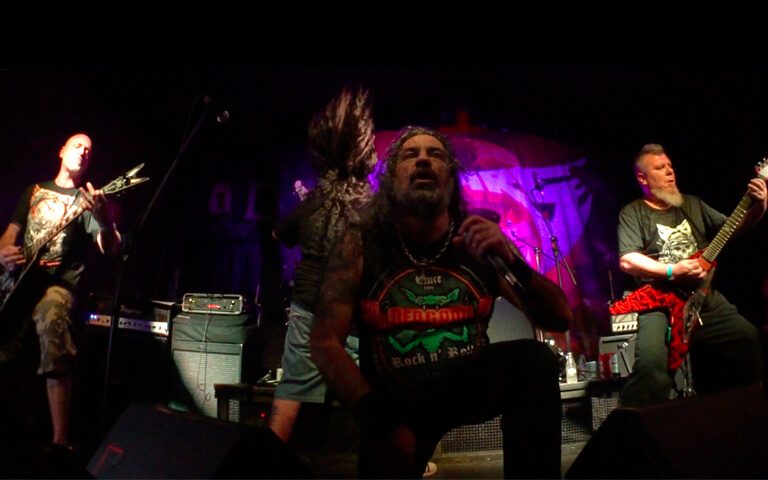 Reinvigorates their own metal classic in a new music video!

Brazilian thrashers, celebrating their career of over 30 years and their first live album, showcase the cohesion and power of their current line-up in a music video for their metal classic «Return To The Killing Ground».

Continuing the promotion of their first live album after over three decades of existence, thrash giants SCARS have recently released an energized version of «Return To The Killing Ground», a classic originally presented on «The Nether Hell» EP (2005), as the second music video taken from the first-ever official live album entitled «Violent Tour 2022: Live In Sao Paulo».

«Violent Tour 2022: Live In Sao Paulo» is also available for sale in digital format through Bandcamp and will also be released in physical format in the first half of 2023.

«This music, besides being killer, has even more energy live. Because of this, we also registered it on video, because we really like how it is performed by this current formation, which is very faithful to the original studio version, but with the addition of Gobo, Mitché and Ricardo’s personal touches. Now we have an updated and monstrous 2022 version of this classic», commented Alex Zeraib (guitarist).

«One of the best tracks from The Nether Hell, which very much deserved to have a video to match its greatness. We play it nowadays with a stronger footprint live, showing technique and cohesion in the whole piece. I am very happy for another Scars’ conquest!», commented Regis F (vocalist).

«It is one of the old songs that I most enjoy playing, and one of the most requested by the public at our shows. So, it’s only fair that we have a live version with this current line-up, and, of course, with me, which, in all modesty, was great (laughs)», commented Marcelo ‘Mitché’ (bassist).

«Besides being a song that escapes from the conventional, it revisits remarkable characteristics thanks to its melodic construction, mixed with variations in tempo and a unique energy. These characteristics, allied to the wonderful receptivity of the public, make it a great classic! It is a great pleasure to be able to perform it live!», commented Joao Gobo (drummer).

«We played «The Nether Hell» in its entirety on this tour as a surprise to the fans, and this particular track really doesn’t let anyone sit still! This particular show was very special and gratifying for me, because I knew it would be recorded for what would be my debut on an official Scars record. The audience was very participative and energetic, which made it easier for us to create the necessary synergy for a memorable performance!», Ricardo Lima (guitarist) concluded.

SCARS is currently formed by Regis F. (vocals), Alex Zeraib and Ricardo Lima (guitars), Marcelo «Mitché» (bass) and Joao Gobo (drums), and intend to present a new phase in their career very soon, with great news for the first half of 2023!